There can be no resurrection without first a birth and then a death to precede it.  Man, though he possessed the image and likeness of his Creator, evicted from himself the eternal nature in which they once shared; for by way of Adam's sin his incorruptible body succumbed to corruptibility, and hence death opened its doors to all that would come after.  However, this was only the beginning of man's self-imposed desolation, for he surrendered not only to death, but to the vanity and corruption that accompanies it.  He fashioned idols to replace the God that grew smaller and smaller in his heart, and when he became tired of them-or they had lost their magic, he went and fashioned more; all stemming from his gluttonous desire to seek and worship a so-called deity of his own design and control.  Through their envy, they swallowed the lies of that ancient adversary, the devil, and feasted upon the rotten fruit of their own sins; perishing, though oblivious to it, more and more with the passing of each day and all but rendering the image in which they were created unrecognizable.  Few remained faithful in those days to the One true God, and yet, even they endured many hardships and travails; for they too, as were all men, slaves to the same death introduced by way of Adam's transgression.

What then was God to do?  Neglect and abandon the crowning achievement of His creation?  To do so, as St. Athanasius puts it, "would be to reveal weakness, and not goodness on God's part, if that is, He allows His own work to be ruined when once He made it-more so than if He had never made man at all."[i]  Verily, it would have been more suitable to have not made man at all than to abandon him and allow him to wallow in his own wretched spoil.  It was, then, completely unfathomable for God to permit man to continuously suffer in such a state, for to do so would be beneath His goodness.[ii]  And so the Creator did the only thing He could possibly do to save and restore mankind; He Himself had to become man and endure death and, by way of His immortality, as Athanasius asserts, "stay the corruption of the race."[iii]  "By being above all, He made His flesh an offering for our souls; by being one with us all, He clothed us with immortality."[iv]

But before man could adorn himself with such clothes, those clothes of immortality, Christ had to first shroud Himself with the same garments of death that had imprisoned all men; which could only be accomplished through Him sharing in the same birth and the same death that all men experience.  And so, we can now say with all confidence that although we die, the sting of that death has been lessened, because Christ out of His abundant love and all-generous mercy, did stoop so low as to share in that death with us.  For since by man came death, by Man also came the resurrection of the dead. For as in Adam all die, even so in Christ all shall be made alive.- 1Corinthians 15: 21-22.  From the time of His birth, Christ had been preparing for this death, hence the scripture reads, "And this will be the sign to you: You will find a Babe wrapped in swaddling cloths, lying in a manger."[v]

As we have come to learn, the purpose of Christ being wrapped in "swaddling cloths" is monumentally significant; in fact, the gospeler Luke upholds this truth by mentioning their use twice amidst his nativity account.  So what, you may ask, is the significance?  Swaddling cloths are burial wrappings, which affirms the one purpose of Christ's coming: to endure death.  As Father has made mention, in the Orthodox icons of the Nativity, the Christ-child is depicted in these burial wrappings, and is done so to illustrate that the supreme purpose of the Incarnation was to make possible the Crucifixion and Resurrection.[vi]  Even in birth, even in this festive Christmas season, Christ is pointing to the Resurrection, for it is for this reason that He came: to restore what was once lost long ago when Adam, through his sin, hung the curse of death around the neck of humanity.

Through the Incarnation, Christ has forever changed what it means to be human, and in His glorious resurrection, He has restored unto man the purpose for his existence; to share in that eternal relationship with his Creator, casting down the garments that bound him a slave to Adam's sin and putting on the clothes of righteousness as sons of the Most High God, as the Epistle declares, "thou art no more a servant, but a son; and if a son, then an heir through God.  Let me repeat that, we are not servants, but sons...

For this is precisely how God our heavenly Father looks upon each of us.  Yes, he sees all that we do, the good deeds and unfortunately also the bad, however His ability to witness such things does not limit Him in the least from still seeing us as the gems of His creation, yes, heirs to His eternal kingdom through His divine grace.  Not servants, but sons.  As Christ is God's Son by nature, so we become sons of God by adoption.  But what exactly does this mean?  Are we sons of God in the same fashion as Christ?  After all, was it not Christ Who said, is it not written in your law, 'I said, "You are gods"'?[vii]

To be clear, no, we do not share the same nature as Christ, however we are called to lead godly lives.  Christ, in saying,  "You are gods", was not calling to mind the sharing of His divine nature, rather implicating the godship we have by way of us bearing His image and likeness.  When we were created, we were made in the image and likeness of our Creator, according to our human nature, therefore humanity by nature is an image or icon of deity.  However, as we have mentioned previously, this image and likeness was scarred by way of Adam's sin and man's hope of recapturing that unspotted image, that is to say, his ability to experience deification (the process of becoming more and more like God) was severed.

Because of the Incarnation, the process of our being renewed in God's image and likeness was begun.  Christ came to repair and restore, to make new what once seemed lost, what humanity could never give unto itself and yet it was that which humanity needed in order to be saved from its own destruction.  In Christ we find our purpose, in Him we have the fulfillment of our human destiny, in Him we have our adoption, becoming by grace what God is by nature; whereby He calls us not servants, but sons, and if sons, then heirs.

However, and this is perhaps the most tragic truth of them all, not all acknowledge this adoption, in fact many rebuke it.  Christ pulls all of humanity under His cloak of salvation, and yet there are those that emphatically reject it.  If this were not so then what was meant by Simeon's words, "Behold, this Child is destined for the fall and rising of many"?[viii]

Think of it in this manner:  two boys from the same foster home get news that they are to be adopted by two different sets of parents.  Both seem excited at first, in fact, how could they not, for all children, at some point in their youth possess that root desire of acceptance and nurturing that only a parental figure can bestow.  However, and quite sadly I might add, this is where the lives of the two boys differentiate from each other.  The one, takes that excitement and uses it as a means of building a trustful and obedient relationship with his parents; while the other, once the excitement has lost its luster, takes issue with the ones who lovingly adopted him because their standard of living conflicts with his own.  And as a result we have two separate outcomes for how these two boys will live their lives; the one, because he has spent years building a loving and trustful relationship with his parents will not just be unto them a son, but an heir to all that they have.  The other, who ultimately rejected his adoption from its early stages, will always have an estranged relationship with his parents, because he never truly believed in them in the first place.  And so it is with Christ; for in His Incarnation and glorious Resurrection, all have access to His adoption, but few truly honor it.

A Sermon by Sdn Stephen 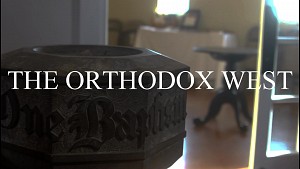